Thanksgiving And Marketing Trends In Turkey 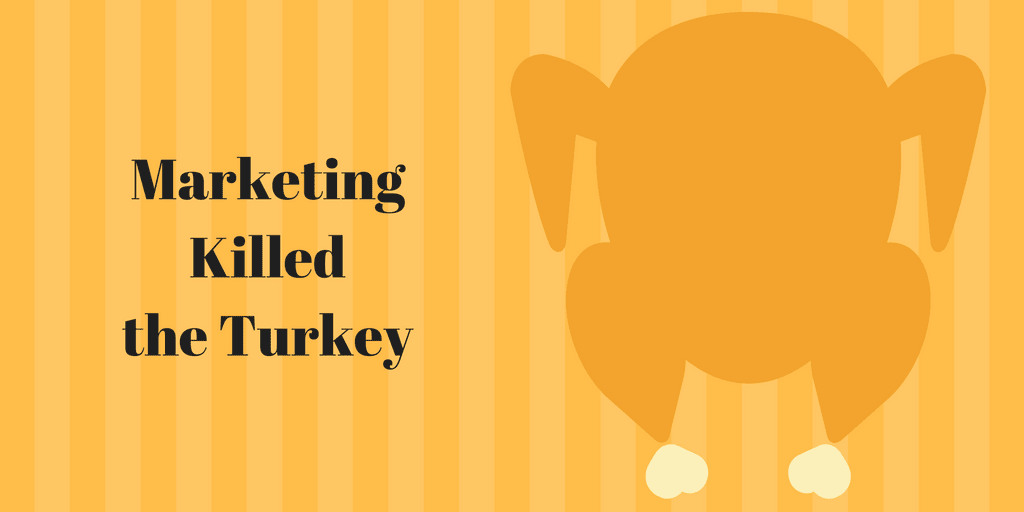 Thanksgiving day is upon us once again! As you prepare for a delicious feast with friends and family, we thought you might enjoy a brief history of why we eat what we eat on Thanksgiving Day, and, of course, a lesson on what the history of this feast can teach us about internet marketing!

What the menu at the first Thanksgiving actually looked like

he modern American Thanksgiving feast is pretty standard: mashed potatoes, stuffing, cranberry sauce and, above all else, a main course of turkey. As delightful as this traditional feast is, it is most likely nothing like the menu that was actually enjoyed by pilgrims and Native Americans at the first Thanksgiving celebration of 1621.

No one can be exactly sure what the first Thanksgiving feast consisted of, but records from the journal of pilgrim, Edward Winslow, show the group enjoyed venison, as the Wampanoag king Massasoit sent a gift of five deer to the gathering. Wild fowl was a part of the feast, but records do not specify if this was turkey, goose, or another bird. Fish and shellfish were also a regular part of the coastal pilgrim’s diet, so it is speculated that oysters and other seafood were a part of the feast.

So why do we eat turkey today?

Approximately 46 million turkeys are sold each Thanksgiving season, and over 88% of Americans enjoy turkey at their Thanksgiving celebrations. So if it was potentially not even served at the first Thanksgiving, why is it now the centerpiece of most traditional gatherings?

As the tradition of Thanksgiving continued, choosing the turkey as the center of the feast was a practical matter. First off, the turkey was a large bird that could easily feed a large group of people, and secondly, unlike cows that provided milk and chickens that provided eggs, turkeys did not have an ongoing value for the community.

Many theories exist around the cultural influences that made the turkey so prominent in Thanksgiving Day celebrations.

Some credit the popularity of turkey to the 1843 publications of A Christmas Carol, in which Scrooge gifts the Cratchit family a turkey for their holiday feast.

Others attribute it to Sarah Josepha Hale, the editor of a popular colonial women’s magazine, Godey’s Lady Book. Known by some as the “Godmother of Thanksgiving,” Hale used her influence as a household name to have the celebration recognized as a national holiday, and included recipes for turkey and pumpkin pie in Godey’s, greatly influencing the foods that women prepared for the feast.

Remember William Bradford, the pilgrim who detailed the menu at the first Thanksgiving? His first-hand accounts entitled Mourt’s Relation: A Journal of the Pilgrims at Plymouth were re-published in 1856 after being lost for a century, which many people consider to have largely influenced enthusiasm for Thanksgiving becoming a national holiday. Further his journals detailed pilgrims hunting wild turkeys in the Fall of 1621, which may have popularized turkey as the main course during the celebration.

Although there are many theories behind what, exactly, influenced Thanksgiving to be the turkey-centered holiday feast that we enjoy today, we do know that we owe it all to Abraham Lincoln who proclaimed in October of 1864, ” Now, therefore, I, Abraham Lincoln, president of the United States, do hereby appoint and set apart the last Thursday in November next as a day which I desire to be observed by all my fellow-citizens, wherever they may then be, as a day of thanksgiving and praise.”

Marketing is why the turkey is still on your plate

Now that you know a little bit of background on why we eat turkey at our Thanksgiving gatherings, it is time for a little lesson on what this history lesson can teach us all about internet marketing for small business.

The first Thanksgiving may or may not have had turkey, cranberry sauce, and other traditional dishes we enjoy at our celebrations today. It also did not gain popularity as a national holiday until over 200 years after it was first celebrated. Sounds to me like Thanksgiving initially had a marketing problem.

However, through marketing of the holiday (and turkey as the main course) in works of fiction, women’s magazines, and the re-release of historical documents, the gathering became a nationally observed holiday that is recognized around the world.

To me, this shows how important marketing is for small business. Without marketing, the tradition of Thanksgiving as we know it might never have made it to today. Instead of letting the tradition die, it was popularized through common social outlets of the time (magazines, books, history books) and it became a holiday that shuts down government facilities, Wall Street, and offices nationwide so that family and friends can gather together to celebrate.

Similarly, no matter how small your business may be, you can harness the power of online marketing to put your brand on the map. Through strategic inbound marketing and its system of tools including SEO, content creation, and email marketing, you can easily raise awareness of your brand and attract your target customers. In the 1800s individuals like Sarah Josepha Hale showed Americans how much they needed Thanksgiving to be a national holiday and how much they needed the turkey to be a part of that sacred tradition. Similarly, through inbound marketing tools, you can show your potential customers why they need your services or products, converting leads into loyal, repeat customers for years to come.

While you enjoy your first, second and third helpings of turkey this Thanksgiving, remember that is never too late to market your brand. After all, it took over 200 years for Thanksgiving to become a national holiday, and for the turkey to win it’s rightful spot as the number one Thanksgiving food of choice. Although, in the end, this didn’t work out too well for the turkey, but you get our point!