Is Google The Only Search Engine

I think it’s interesting to see how the same mass-market ideology that applies to consumer products also applies to SEO. For example. Mac computers are widely regarded as being “virus free” (and even more so with Linux). But this isn’t because a Mac cannot be hacked or infected with malware, but it’s because doing so isn’t as profitable for hackers as it is with a Windows PC. Why? Because there are far more Windows users than there are Mac users. According to NetMarketShare, Windows users account for a whopping 90.85% of all users! 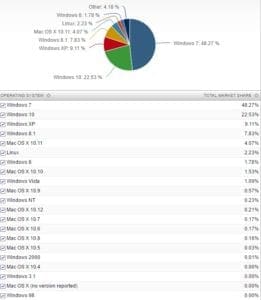 Windows dominates the market with 90.85% of all users!

So, when a virus is made to steal sensitive information, the malware creator can expect that 0.01% of all users will become infected and will give up information that can become profitable. Hackers get the best odds by spending their time attacking Windows systems, not Mac.

This is the mass-market ideology. And it applies to every business on earth. This is why so many companies have a hard time defining who they will service, because why target a smaller group when you can target a large one?

Mass-market SEO comes in the form of Google

In terms of SEO, it’s no different. Google is, without a doubt, the largest and most popular search engine in America (and across the world for many countries). Google amasses over 3.5 billion searches per day!

Getting your website on the front page of Google is one of the most sought-after necessities of the internet. Many companies focus so much on SEO that they do not actually plan for what they’ll do with their traffic once the land on the front page–but that’s another topic.

But why is all of the emphasis on Google? There are other search engines online that people use, right? Of course. Bing, Yahoo, Yandex, Duck Duck Go, Youtube, Vimeo, etc. The list goes on. Google is tog-dog for sure, but what about the people that do not use Google for one reason or another, where’s the emphasis on the smaller market share?

When comparing the market share of search engines, as we did with operation systems above, Google dominates, but Bing, Baidu, and Yahoo are all in close competition with each other. (Side note, AOL still exists?) 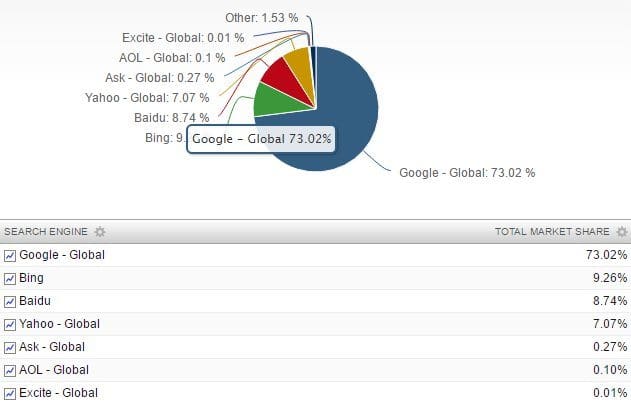 So when a company needs to drive 5,000 new visitors to their website per month, their odds seem to be greater if they focus “73%” of their efforts into Google’s monster search market. I mean, wouldn’t you rather spend your time reaching out to 73% of your audience instead of a mere 9%? Of course you would!

Competition on Google is fierce. Bids are higher, visibility is higher, and the stakes are higher. If you plan on ranking well for a popular keyword, you’re in for a great battle. It’s not impossible to rank well, even for single-word keywords, but it is incredibly difficult (for obvious reasons).

While other search engines offer a smaller piece of the pie, keep in mind that the competition is also a fraction as well. Still, it’s difficult to rank well for popular keywords in Bing or Yahoo, but you’ll spend a lot less resources in your battle for the top as you would with Google.

Your traffic may be coming from other search engines already

I manage a website that garners over 30,000 unique visitors per month. This isn’t by accident, it’s because of the cumulative efforts of a very defined SEO strategy. But guess what? Bing accounts for 45% of traffic while Google only accounts for 37%!

Knowing this, it would be even more beneficial for me to invest resources into Bing since this website is already doing well there. Google is larger, yes, but the majority of this website’s traffic is coming from Bing. This makes the size of Bing and Google irrelevant because, according to the chart above, Bing is 45% of the pie while Google is only 36%.

Which search engine should you use?

This is a very broad question that cannot be answered without context, but sure enough, I’ll be asked this question so I’m addressing it here.

This post isn’t meant to answer this question. This post’s intent is to bring more awareness to the other search engines that make up the internet. Performing keyword research and competition analysis is a very important step when determining which keywords to try and rank for. By doing this research beforehand, you should be able to answer this question yourself.

If a keyword is very competitive in Google, check it out in Bing or Yahoo. Sure, there is still competition, but does it look easier to penetrate? Then, is it worth going after due to the lower search volume?